So after some time with Mother Russia’s finest I finally managed to get past real life and arrange a 1250 point K47 game.

This was against Nick one of our resident Brit players who said:

“I’m bringing an armoured platoon for a laugh tonight”

And my simple thought in reply was:

Now those who’ve not played Nick may not realise, his idea of a laugh looks like this…

His lists are always sharp, and he plays them well. It’s always a fun game, just expext the burns to not only be sarcastic!

When coming up with my list, I decided to try a simple focus; there is a lack of love for the mainstay USA walkers – the Grizzly and Coyote – mainly as there are better medium options in the USA list and the Coyote seems undergunned and is hampered by only being able to fire one weapon.

However with the extra MMG dice from the Resurgence rules the Coyotes just got a leg up, so it was time to let the pack out to play.

The Grizzly’s issue is still that its only rolling one dice and it’s me rolling it. However the Painted Lady makes an excellent command walker, so is officially in charge!

Apart from that I decided to keep all my walkers feet on the ground – the Mudskipper/Jackal air wing can have a night off.

Veteran Kodiak – The Curse of Scotland

I double platooned for a simple reason – I had 1 too many walkers for a single platoon!

Now looking at this I realise platoon one is missing one of the mandatory troop choices. If this bothers you imagine one of the Coyotes wondered back to the pack!

I was quite suprised to have the order dice advantage! 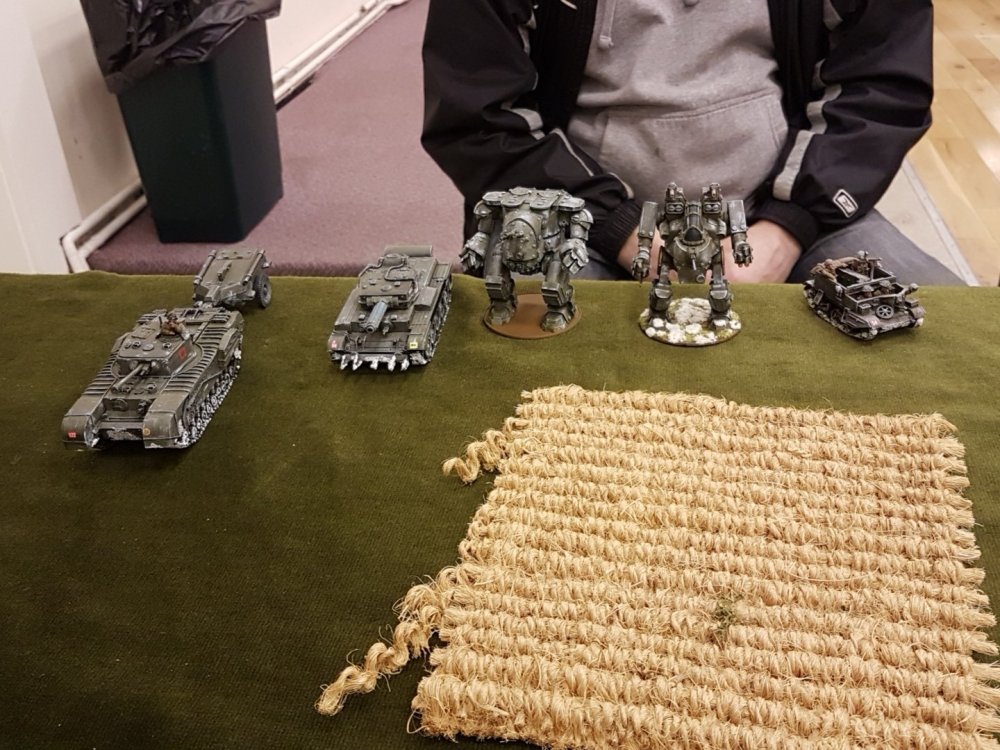 We played the standard armoured platoon scenario from Resurgence, which is essentially take and hold with points for each objective being gained each turn.

The game had a play by play on our twitter feed if you want the gritty details!

I love this game and this list. Particular highlight for me was the amazing performance of the Painted Lady that was doing very well right until Nick blew it up!

I still hate flamethrowers and how they can wreck my day and I am proper scared of the Churchill Crocodile – as is right to be so!

Also games like this where both sides have models that cannot damage the enemy become interestingly tactical. Nick’s Bren carrier acored him crucial points, wheras the Coyotes were on objective holding rather than offense, well right until Nick’s Churchill went through my Medium walkers like a T Rex through a crowd of toddlers!

Had the game involved dice lost or gained, or gone a turn or 2 more it would have been different result. I clung on despertaly to the early lead.

The scenario is great fun, and we already have plans for a rematch at higher points.

Now, its got me inspired again, where is my USA Green Undercoat…….

*when told about this, Nick stated it was unrealistic as this guy has hair.