Hi all, at the weekend there was a one day Konflikt ’47 event in Bedworth, near Coventry.  Our TO asked for themed lists complete with a back story and players were allowed to select a single tank platoon or up two reinforced platoons from either Konflikt ’47 books released to date.   I wasn’t initially playing in this event, I had signed up as a spare player and to help run the day, at the last minute on Sunday we had someone wanting to play in the afternoon and as a result – my tank platoon got to roll into action.

I had decided early on to run with a tank platoon for this event.   Given how many points we had to play with I thought that I could run a competitive list with three tanks to intimidate opponents who were expecting more infantry.   The list that I took looked like this;

Well I did want a small elite and fast moving force, and that’s certainly what this gave me, although I have to admit it was much smaller than I am used to running and it’s unlikely that I’d run it in this form again. 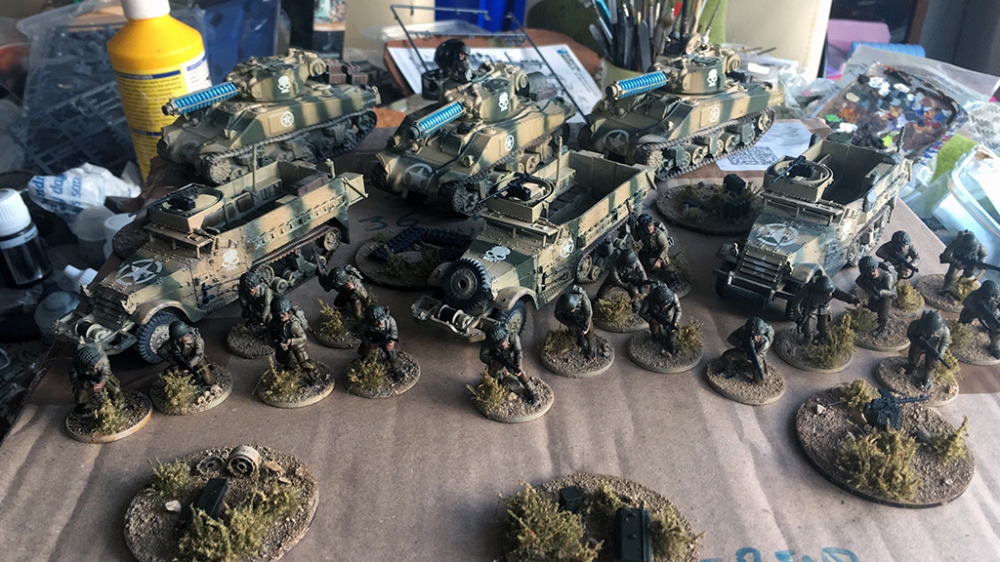 I’ve changed my mind on Tesla and I’ll explain why.

Firstly, I’ve been dumb (this is not a new thing!) and I don’t know how but all this time I’ve been reading the Tesla profile wrong.    The actual Tesla Profile is this (from K47)

The Tesla rule in the K47 rulebook is as follows

“Tesla weapons have two penetration values, the lower value is used against infantry and artillery, the higher value is used against vehicles.   When targeting infantry and artillery the weapon arcs to nearby targets. After a successful hit is rolled, roll a d6, and this number of additional hits is inflicted on the unit. If the number of hits exceeds the number of models in the unit, any excess hits are lost.”

Now for some reason I had misread both the Penetration Value and the number of hits scored.   If you listen to rift tech radio or read my reviews of various boxed sets you will hear me  / see me saying how good I think Tesla is with it’s D6+1 hits.    Where I got this from I’ll never know as it’s never been in any rules that I can see anywhere.    TL:DR I need to RTFRB! (read the flipping rule book)

The real issue with Tesla however,  is not what I’ve just said, the real issue is range.   To get into short range the Sherman-T has to be inside of 18″ and this is just far too close to infantry.  This is further compounded when running an expensive tank platoon meaning that you’re unlikely to get the first dice every turn and therefore are vulnerable to point blank panzerfaust.   The comparatively short range of Tesla really reduces it’s efficacy on the table as I found myself needing 5s to hit for most of the games I played (moving and long range) whilst my opponents were often able to stay still and then hit me in short range, adding pins and thus further reducing my accuracy in subsequent turns.

If I run this list again, I will be ditching the M4A9 Sherman-T and instead be running with three M4A3 Shermans, one with 76mm gun and two with medium howitzers, which would easily handle most of the difficult things that I’d face whilst also giving me resilient anti-tank that can sit at range.

One thought on “Running a Tank Platoon in 1250 point tournament”