I originally wrote this in December and have meant to publish it for a while.    I think part of me was waiting for us to do a group feedback for the event in Bedworth but with everything that’s happened in the last couple of months getting a hole in the schedule for the 4 of us to get together just hasn’t been possible.    James gave me a nudge and told me that we should publish some of our long term draft articles or delete them.    I thought I’d add some pretty pictures to this and get it out.

So the dust has settled after our first one day event in Bedworth.    I thought I would give my feedback on how it went and how I thought the lists played out with the scenarios.

For those who haven’t read the pack or seen James’ announcement article here, we held an event at 1000 points with three scenarios being played.    The three scenarios were Double Envelopment, Demolition and Key Positions.   We used the scenarios from the Bolt Action 2 rulebook as they seemed to have that little bit more about them.

2 Veteran guards squads with LMG, 3 SMGs and a captured PanzerFaust in each

A Free rifle squad, NCO with SMG, all with anti-tank grenades and the green special rule 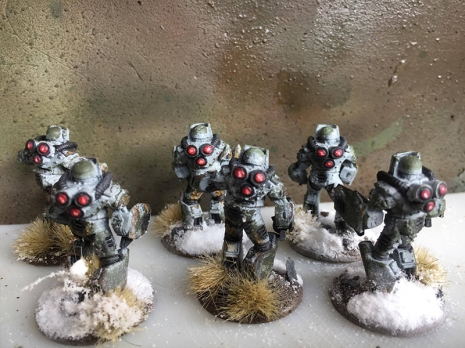 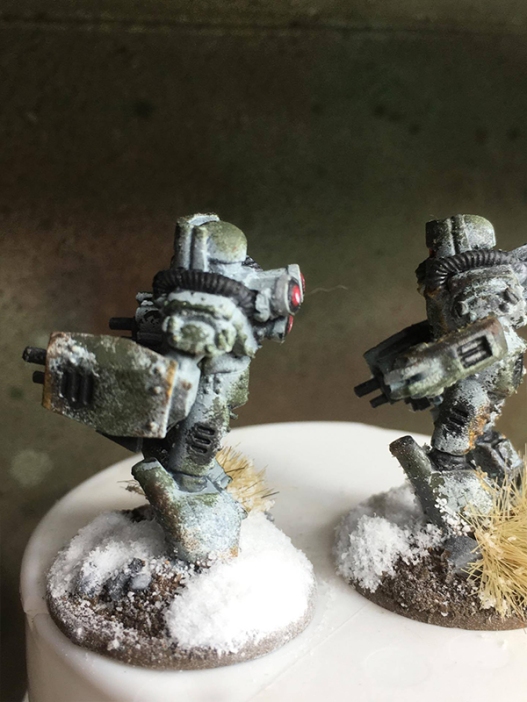 Left hand Close up showing the weathering around the weapons 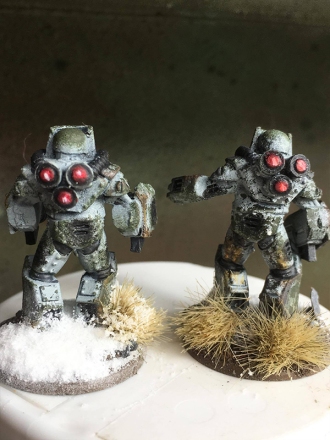 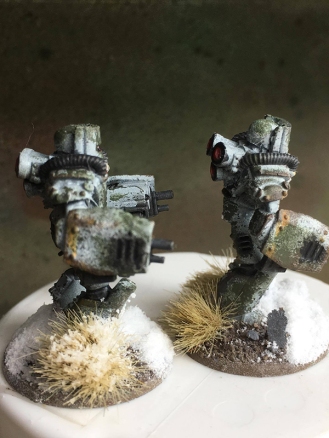 Right hand Close up showing the weathering around the weapons 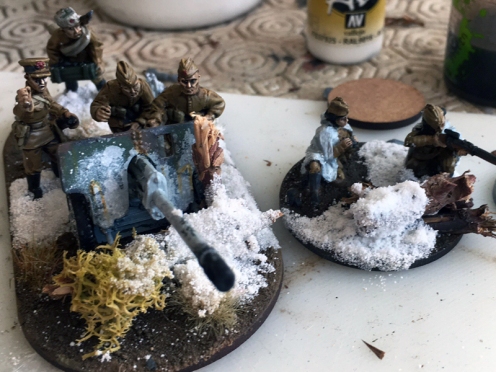 The right hand side, not the stippling on the exhausts 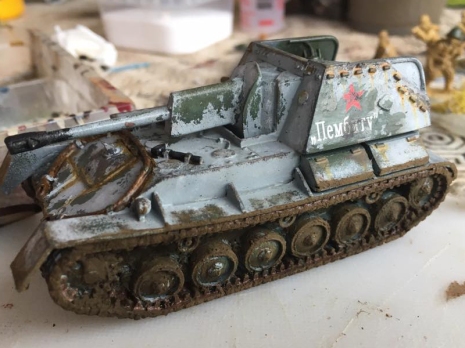 The left hand side, the side containers were heavily weathered 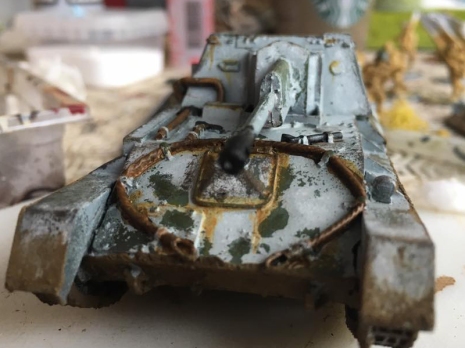 The front of the SU-76 showing Rust Streaks and Mud

My first game was against Keith, a fellow Soviet player who was running a list that was similar to mine.     Keith had chosen to take the ISU-122 in his list however and I was intimidated by the power of that thing as it rumbled onto the table.    This game taught me to double check my LOS at all times.    In the first turn I foolishly left one of my Heavy Infantry in the open and the ISU-122 deleted three of them with ease.   I was lucky that Keith rolled low with his 2D6 HE hits.    After that the flexibility and firepower within my list came to the fore and whilst I was unable to prevent Keith getting his ISU 122 into my deployment zone to claim 2 VPS I was able to get my SU-76 and command squad off the table along with three units in his deployment zone to take the game.      This scenario is good fun as you have to think about how you intend to get over the table in one piece whilst preventing your opponent doing the same.

The second game was against John and his Mad scientist themed Zombie army.   This game started with a bang when John annihilated my command team with nebelwerfer shot from the back of the table.    I gained my revenge shortly afterwards when a HE shell from my trusty SU-76 blew his squad of Nachtjaeger into tiny pieces.     That ended this game really as John had nothing else which could reach my base.   I on the other hand spent the next 5 turns trying to kill units and open up a path to his base.   Alas it was not to be and I had to settle for a draw.   Looking back on this game I realised that I was far too scared of his zombie units.    I had reduced both to small numbers with shooting / artillery and just needed to get in and through them.    Instead I spent too long trying to remove them with firepower when I had the infantry units to literally zerg them.

This was my favourite game of the day, I was playing against Craig, a long time bolt action player with a lovely late war German Heer army.    We had 5 objectives to fight over and this was without a doubt the bloodiest game I’ve ever partaken in.     At the start of the game Craig pushed very heavily down one flank which left me the other flank to play with.    I crossed my fingers and hoped that the combined fire of an inexperienced rifle team, zis-3 and a couple of anti-tank teams could hold him off whilst I pushed hard down the opposite flank to secure three objectives.    This turned the game into two very bloody engagements where heroic defenders found themselves facing a much greater foe who had the advantage of weight of numbers.     For three turns we were trading units and weapons team with the result ebbing and flowing as a result.     A couple of ridiculous morale checks by me managed to activate my heavily outnumbered and pinned units and hold off the attack on the right flank whilst the advantage of numbers allowed me to overwhelm Craig on my left flank.     The game finished with us still trading units and me holding (luckily) 4 of the 5 objectives.

I thought the day went really well and once James returns from his week off grid (he’s on holiday) we’re hoping to do something a bit special to discuss the event.    I managed to take second place which was lovely but also disappointing as  I’m confident that had I not sat back so long in game 2 I could have been competing for first place vs Roland’s airborne germans!       At this time of year my hobby budget becomes the Christmas Present budget so now I have a voucher to help secure some rift tech units for my Soviets (This voucher actually went towards my unit of terrors).

Long time readers will be pleased to hear that Shipman is still seeking his first win and was a worthy recipient of most sporting, generally for the good humour he has shown in the face of unrelenting mockery from his colleagues at the club!

The consensus amongst players was that the scenarios worked for games 1 and 3 but the middle scenario should be changed.   This probably reads like sour grapes after I was blocked from glory by that blooming zombie horde, but the feedback from all players and James was unanimous in this regard.   As an event, however, it was a great success, everyone had fun (or seemed too) and there was some legendary fluff written too (It wasn’t all about beardy power gaming options!)