With the release of the new Flammspinne Panzermech from Warlord games there is no better time to have a look at this stalwart the German Wehrmacht. 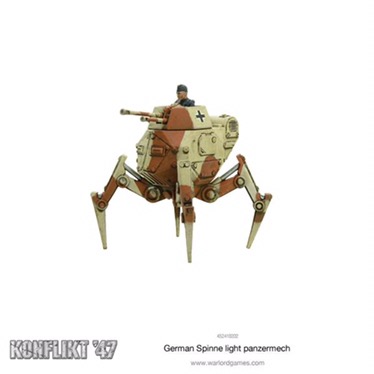 The Spinne Light Panzermech was one of the very early releases for k47 and I must admit I wasn’t keen to begin with it looked to top heavy for me, however as I’ve worked with the kit and added extra details like stowage I’ve really grown to like the little fella!
The kit is very easy to assemble, the legs have nice solid joining points so they shouldn’t break off easily. I’ve based mine as I like the look of the based mechs but it would stand up on its own just fine.


The new Flammespinne looks particularly nice with the stacked flamethrower and Light AT gun, a little extra stowage and it’ll fit in with my existing one perfectly! Onto the rules for 125 regular or 145 veteran you get 1 spinne in the armoured car slot in the platoon with a light AT gun and co axial light automatic cannon in the turret. It’s a walker, agile, Open topped, Recce and has Flak, all in all a nice package.

For 30 points, you can upgrade it to lose Open topped and Flak but gain a small Vehicle flamethrower.

Now I’m sure you just read that and thought why would I not upgrade the spinne to have the flamethrower and you’d probably be with most German players it’s a great combo recce light AT for vehicles and a flamethrower for infantry is a lethal combination all for 155 points regular.

But the basic Spinne one does have its place the Autocannon and light AT are excellent at shredding heavy infantry and Rift tech monsters like the Soviet Bears or even rogue Schrekwulfen at range plus if your American enemy takes air support you can try and drive it off.

The usefulness of Recce on it cannot be underestimated and for me it’s where the real power lies the ability to move out shoot then move back again when shot (only once in K47 though!) is powerful allowing its range and maneuverability with agile to really come into play.

It does have some down sides, Open toped can make it really susceptible to sustained rifle fire through pins on the basic model, and at armour 7+ it has to watch out for small bore AT weapons as it won’t stick around long.

Overall it’s a great little walker and slots into nearly every German list I write because of its utility Flame thrower or Autocannon depends on the role you see for it but both are solid in my opinion!

So much so I’m planning a Tank wars list with 4 of the little Spinne’s in!